We are just finishing another great week of athletics at MHS.  Our Girls Soccer Team won their last regular season match vs Bloomington North.  They finished the season 12-3.  The Volleyball Team went 2-0 this week with wins over Danville and Cascade (Senior Night).  Chandler Gunnell with Boys Tennis advanced to the Individual Regional on Tuesday/Wednesday at Brownsburg.  The Girls Cross Country Team won the Morgan County Meet on Tuesday night.  Madison Vauters was the race winner.  The Boys Cross Country Team finished 2nd in a close contest with Martinsville.  Quinn Cavin and Aaron Culver led the Pioneers and both recorded times of 18:26 and finished 3rd and 4th.  On Saturday, we had a number of Student-athletes help with the Rededication Ceremony.  At the bottom of the article are pictures from the event.

Next week, we begin Sectional action for Boys and Girls Soccer and Cross Country.  The Boys Soccer Sectional will be played at the Mooresville Soccer Complex starting on Monday night.  The first match will be between Avon and Plainfield starting at 6pm.  The Pioneers will play Danville on Wednesday evening starting at 5pm.  The winner of Avon and Plainfield will play Brownsburg immediately following our match on Wednesday.  The finals of the Boys Sectional will be played at 6pm on Saturday evening.  The Lady Pioneer Soccer Team will open up Sectionals vs  Plainfield on Tuesday evening.  If the Pioneers win the first match, they will play Danville on Thursday night at 7pm.  The finals for Girls Sectionals will be held at 2:00pm on Saturday.  The Girl’s Tournament will be played at Danville HS.  The Cross Country Team will be running in Sectionals on Saturday morning, October 11th at Franklin Community HS.  The girls race will start at 10:30am and the boys will start at 11:15am.  Also next week, the Volleyball Team will be traveling to Decatur Central on Tuesday night and the Varsity Football Team will host Martinsville on Friday night.  During that varsity football game, we will be recognizing our senior athletes from Cross Country and Girls Golf along with the senior members of the Band and Color Guard.  We will also be recognizing the October Winners for the Champions of Character across the district.  Here is a full schedule for this week’s events.  Week of October 6 – revised

October is Breast Cancer Awareness Month.  Next week, we are going to have a few activities throughout the week promoting this cause.  We will be fundraising for the American Cancer Society (ACS) with different items throughout the week.  On Monday and Wednesday, Student Council will be attending PEP classes to sell pink bracelets.  We will be having a class competition for Winter Homecoming Spirit Points. The class that raises the most money will receive spirit points. Student Council will also sell the bracelets during lunch on Thursday.  On Wednesday, we will be having a Pink Spirit Day.  Mrs. Selby will be judging the contest on Wednesday morning at 7:45am in front of the Guidance Office.  Spirit Points will be given out and the winners will also receive a ticket to the Football game on Friday night.  We also will be having a few activities on Friday night at the game.  We will encourage everyone to wear pink to the game.  The theme for the night will be a Pink-out. During the game, we will be recognizing any Breast Cancer survivors in attendance between the 1st and 2nd quarters along with collecting money during halftime.  Last year, we raised almost $1600 for the ACS.

We hope that everyone will be able to get out and support the Pioneers this week.  We have a number of great events and I know that our student-athletes appreciate the positive support from the crowd. 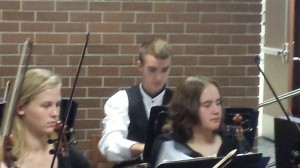 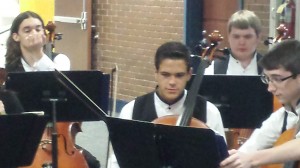 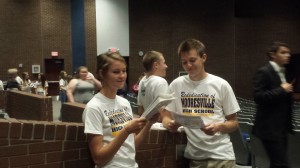 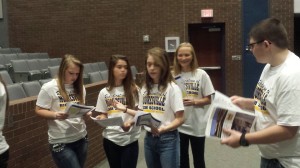 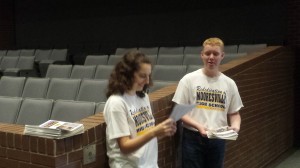 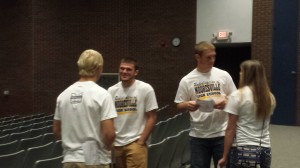 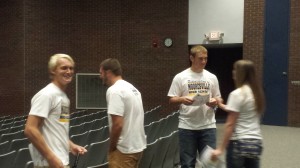 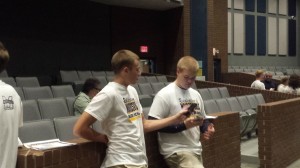