The Pioneers had a great week last week.

The Lady Pioneer Basketball team played twice this week.  On Tuesday, they hosted Terre Haute North.  That night all 3 levels (V/JV/9th) won!  The Varsity team won 71-63 and were led by Lauren McBryar with 22 points.  Then on Saturday, the Lady Pioneers traveled to Fishers.  At one point during the game, they were up 28 points and play extremely well.  The finished with a convincing win 55-32.  They are now 6-3 on the season.  This week will be very busy for the Pioneers.  On Tuesday, they will travel to Avon.  Then on Wednesday, they will host Northview.  That game was rescheduled from earlier in the season.  Then on Saturday, they will travel to Greenwood for their 2nd conference game.

The Boys Basketball team won a triple overtime game on Friday night versus Danville.  After going up 10 points in the 3rd, Danville rallied back to tie the game.  After 3 overtimes, the Pioneers came away with a 59-57 victory.  KC Earls hit the game winner with 1.2 seconds left in the third overtime.  On Saturday, the Pioneers had their home opener versus Terre Haute South.  After getting off to a good start, the Braves had a great run in the 2nd quarter to take the lead.  The Pioneers were not able to close the gap throughout the game and lost 44-58.  This coming week, the Pioneers will only play on Saturday at Speedway HS.

The Boys and Girls Swimming/Diving teams had a great week.  On Tuesday, they hosted Indian Creek and Speedway.  The Boys team beat both teams that night (Speedway 82-19 and Indian Creek 61-37).  The Girls went 1-1 that night beating Speedway 64-29 and losing to Indian Creek 35-58.  Leading the Pioneers that night were:  Bella Crayton, Haley Wilson, Sydney Heitman, Taylor Johnson, Thomas Weber, Kylan Williamson, Jack Dillon, and Ashton Johnson.  Then on Saturday, the Pioneer hosted Decatur Central.  Both Boys and Girls came away with the victory.  The Girls won 90-87 and were led by: Haley Wilson, Julia LeBlanc, Bella Crayton and Cami Henry.  The Boys won 103-83 and were led by:  Ashton Johnson, Seth Heitmann, Taylor Johnson, Thomas Weber, Dylan Rogier, Kylan Williamson, Noah Wheele, and Hunter Dickerson.

The Wrestling Team also had a good week.  On Tuesday, the beat Martinsville 45-26.  Winning that night was:  Jaden Harris, Spencer Cox, Mike Atkinson, Ethan Wymer, Michael Craig, Augie Newkirk, Kaleb Sanders, and Dennis Henson.  On Saturday, the Pioneers hosted an 8-team dual meet tournament.  They went 2-1 in their pool beating Indian Creek and Decatur Central but lost to Homestead.  With the 2nd place finish in the pool, the Pioneers crossed over and competed against the top two teams from that pool.  The Pioneers fell in both of those duals to New Palestine and Plainfield.  Wrestling well on the day were:  Andrew Sanders (5-0), Spencer Cox (4-1), Michael Craig (4-1), and Dane Smith (4-1).  The Pioneers are 5-6 on the season.  This week, the Pioneers will be hosting Franklin Community on Tuesday night.  That night, they will be wrestling a dual meet for Varsity, JV, and the Paul Hadley Middle School.  With three mats of wrestling going at the same time, it should be an exciting night.  Then on Saturday, the Varsity will travel to Zionsville for a tournament starting at 8:30am.

Here is full schedule for the week.  Week of December 7

On Saturday night at the Basketball game, we were able two presentations.  After the JV game, we recognized the Champions of Character award winners for December. 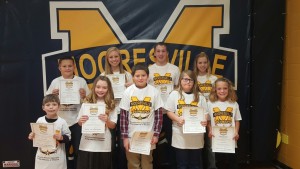 Then just before the start of the Varsity game, we recognized George Fields.  George graduated in 1939 and was selected to the 1st ever Indiana All-Star Team.  His family was in attendance that night to present the memorabilia that will be placed in Heritage Hall at MHS. 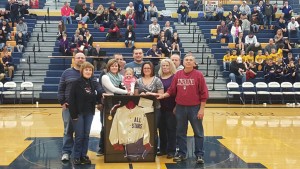