Senior Robyn Arvin has been cheering for several years and has spent her last two as a member of the Varsity Basketball Cheerleading team. This season she earned the honor of being one of the team’s co-captains. Arvin has also been a part of the Varsity Football Cheer team.

Arvin enjoys cheering because it gives her a great opportunity to support all of athletes at MHS. She also loves the close bonds it allows her to form with her fellow teammates. Her goals for this season are to help her teammates to grow as athletes and also to grow even more as a family.

In addition to cheer, Arvin is also involved in National Honor Society, Champions of Character, and she also coaches a special needs cheerleading team. While she does not plan on cheering in college she plans to  continue her academic career at Indiana University. Arvin looks forward to majoring in elementary education. 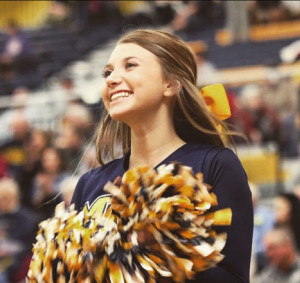