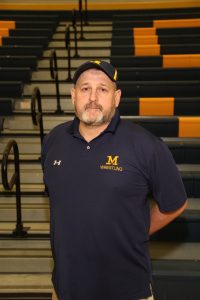 Coach Dan Mikesell is a 1989 Mooresville High School graduate and played football, wrestled and ran track as a Pioneer. He graduated from Indiana State University with a B.S. in Social Studies Education and then earned an M.S. from the University of Phoenix in Curriculum and Instruction. In 1994, Coach Mikesell began his teaching career at Terre Haute North Vigo High School and became the school’s assistant wrestling coach that year. While at THN, Coach Mikesell assisted the THN wrestling team that still holds the school record for the most dual-meet wins; coached his athletes to four sectional team titles; and sent the first wrestler, since 1974, to the IHSAA State Finals. In 2003, Coach Mikesell accepted a position as the head wrestling coach at Northview High School in Brazil, Ind. While at NHS, he compiled a dual-meet record of 200-81 and guided the NHS Knights to a sectional championship as well as 13 consecutive winning seasons. Under Coach Mikesell, the NHS Wrestling program won six Western Indiana Conference titles and qualified 12 individuals to the IHSAA state finals. He was also the defensive coordinator for the Northview Football program for 12 years. Coach Mikesell married Laura Mikesell, who is the school counseling director at Mooresville High School. They have two children, Brandon and Keirsten, who are in their 20s. Mr. and Mrs. Mikesell enjoy spending time with family, their three Labrador Retrievers, exploring the outdoors, traveling, and cooking.