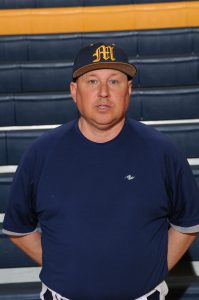 Eric McGaha enters his 13th season at the Head Coach of the Mooresville Pioneers Baseball Team.  The Pioneers experienced their most recent success under Coach McGaha, capturing the 2004 Sectional and Regional titles.  In addition, the Pioneers have had a vast number of players play college baseball during this time period.

Coach McGaha was a 1991 graduate of Warren Central High School where he was a three-year letter winner in baseball and a captain on the 1991 Sectional championship team.  He played two seasons of college baseball at Purdue University North Central before starting his coaching career at Kankakee Valley High School.

Coach McGaha would like to thank all of the former players and coaches who’ve served with him throughout his years in coaching.  “I really enjoy the relationships formed throughout the years with former players and coaches that make this journey exciting.  Helping build character in young kids is an excitable opportunity I  truly cherish as a coach.”

Mid-State Tourney
9:00 am
View All Events