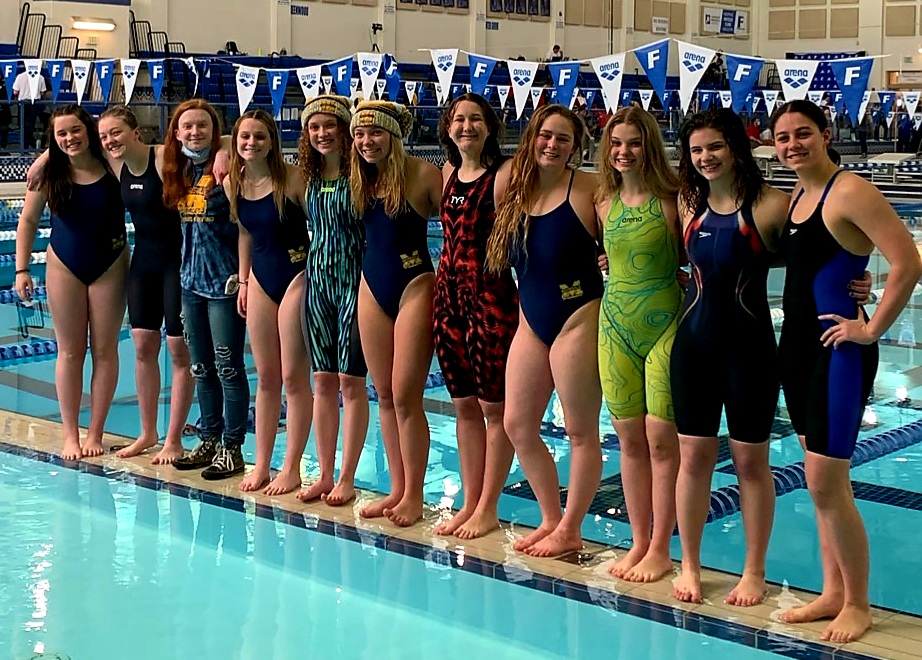 Girls Varsity Swimming ended with every swimmer hitting a personal best time for the season. Two Freshmen made it back to finals and swam lifetime bests. Claire ‘Natalie’ Newton gave an impressive showing in the 200 Freestyle while Brooklyn ‘Barracuda’ Tidd was able to bring home some points in an extremely competitive 100 Backstroke event. Cora Winegarden made the Top 10 in one of the fastest 50 Freestyle fields in the last several seasons. The Pioneer girls packed the 100 Butterfly. All three girls made it to the finals. Ariel Theriac, Sydney Gercak, and Mikaylah Alexander all swam personal best times and filled the lanes with Mooresville caps. Eryn Hetser was in the finals for the 500 Freestyle and just missed the school record by 3 seconds. Eryn swam the 200 Free earlier in the day and just missed that school record as well but only by 0.5 tenths of a second.
The 200 Freestyle Relay team of Ariel Theriac, Isabelle Deverick, Mikaylah Alexander, and Cora Alexander came so close to setting a new school record it is hardly discernible. They were just 2 hundredths of a second from breaking that record. The time to beat was 1:47.10 and Cora swimming the anchor leg touched the wall at 1:47.12.
Isabelle Deverick and Sydney Gercak were fast enough to make it back to the finals in the 100 Breaststroke for some more Pioneer Pride.
Then in the very last event of the very last meet of the season, the Mooresville girls showed their grit and determination. After being ridiculously shy of school records earlier in the day, the 400 Freestyle Relay team had had enough. Eryn Hetser, Ariel Theriac, Mikaylah Alexander, and Cora Winegarden were fired up and ready to break their own record AGAIN! The last two times these girls swam the 400 Free Relay they set a new record and this time they were going for the trifecta. All four swam the fastest 100 yards of freestyle they have ever executed and set new personal records. There was no question if this record had been broken when Cora finished her leg of the relay. They dropped over 4 seconds from their prelim time which was the previous school record they had set just 2 days prior. At the end of the finals, Eryn ‘Hester Prynn’ Hetser, Ariel ‘Willy Wonka’ Theriac, Mikaylah Alexander, and Cora ‘Joker’ Winegarden had dropped 8 seconds off the record from where it sat at the beginning of the season. A fantastic performance in a normal year but considering the hurdles of the broken season this year is a testament to the hard work and toughness of the Pioneer Girls.