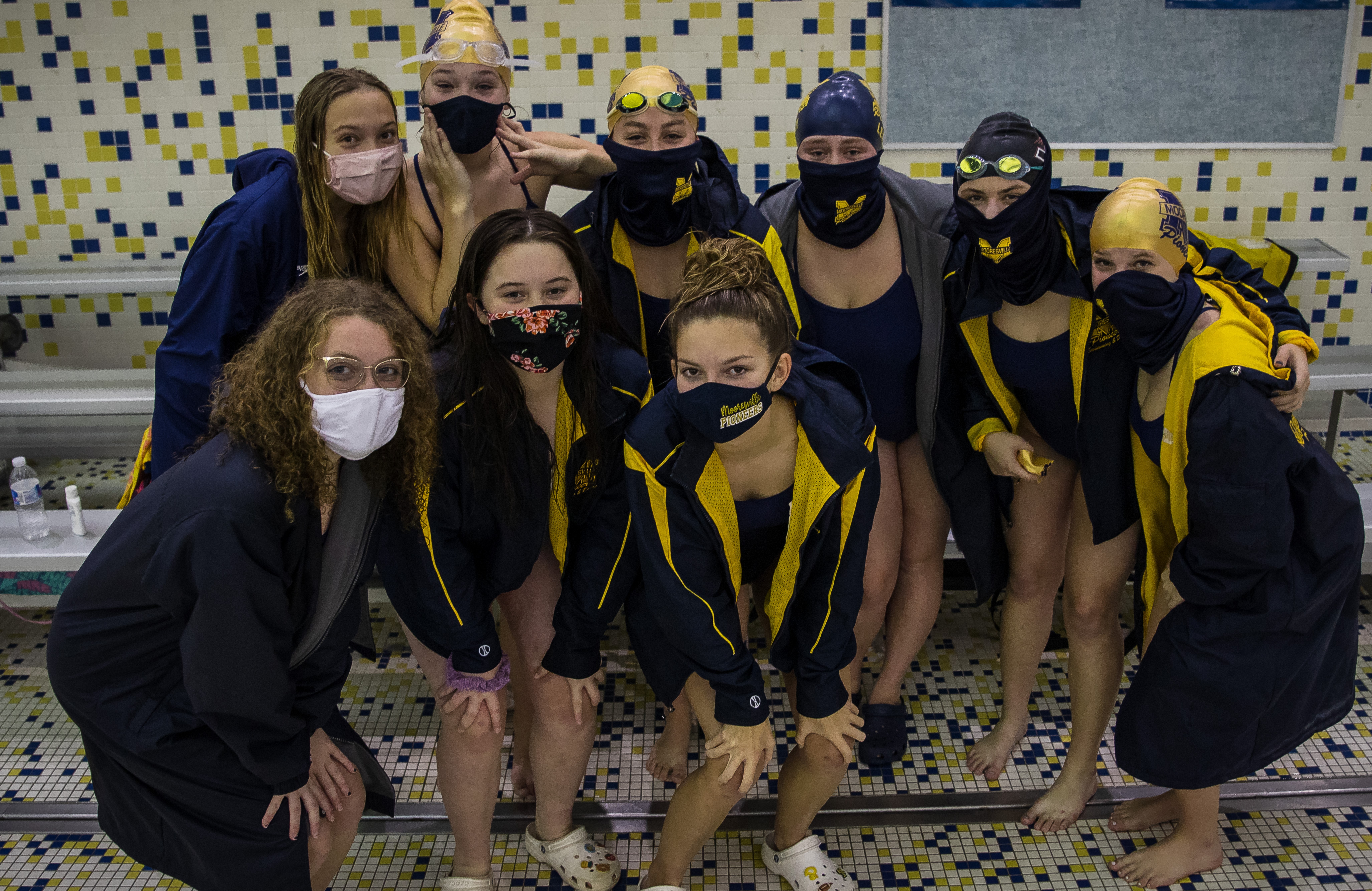 The Girls Varsity Swim team opened the season against Brebeuf with another school record and some serious grit. The girl’s team is depleted down to a roster of just 10 swimmers. Contract tracing left the team with the bare minimum number of swimmers to compete in all the events. Brebeuf mustered quite a few more swimmers as was able to post B and C relay teams where we couldn’t compete. Even with that the Pioneers still battled and performed mightily and fell just 2 points short. Relays score double points compared to individual events so Brebeuf should have been up by closer to 16 points but the Pioneer girls had such a commanding performance that they came within just 2 points of taking the win from a much larger team.

The first event of the night showed just how fast the meet was going to run. Freshman Claire ‘Natalie’ Newton anchored the 200 Medley Relay and swam a personal record to start off the night. Senior Mikayla Alexander then took 2nd in the 200 Freestyle. Junior Isabelle ‘Tiny Tina’ Deverick and Senior Sydney Gercak flew off the blocks for the 200 Individual Medley with both of them swimming lights out fast first 50 fly split. They both finished with PR’s taking 2nd and 4th respectively. Isabelle’s strokes looked so strong and smooth throughout the entire race at one point one would think she was performing an ad hoc stroke clinic in the middle of a meet.

The 50 Free is always an exciting race. It is pure grit down, a flip turn and back. Junior Cora ‘Joker’ Winegarden has owned this event since she was a Freshman and never fails to make it exciting. She is the current Mooresville High School record holder in the event and has broken her own record every year in the 50. Cora wasted no time in once again proving she is the reigning queen of the 50 Free. Her start was explosive and she was at the bulkhead in under 12 seconds and came home with a time of 26.42 breaking her own record for the 4th time. Not to be outdone, Freshman Jill Ramsey and Ellisyn Gillum both also cranked out PR’s in the event to keep the points rolling in.

After a break, Cora was back on the blocks for the 100 Fly. She easily took 1st in the event and swam just off her PR from the end of the season last year only 2 seconds off the school record set back in 2013. Freshman Claire Newton also had a powerful swim with her debut as a flyer and swam a PR.

With the roster depleted, the Freshman had to step up and Jill Ramsey did so with aplomb! The 100 Free is a fast 100 that is big on grit and eating pain. She had the best performance of her career to date and held her own against 3 Seniors. Mikaylah Alexander and Sydney Gercak never disappoint in their efforts. Sydney swam another PR with Jill on her heels while Mikaylah battled for 1st coming up just short but the girls took 2nd, 3rd and 4th so a nice point grab.

Junior Morgan Pierson and Sophomore Cora Walker kept the points rolling in taking 2nd and 3rd in the 500 Free. Morgan makes the 20 laps look easy and is on track to take down the school record before sectionals. This is where the meet became fun for Cora Walker. Another swimmer was quarantined literally right before the swim meet was to begin so events had to be shuffled and Cora was thrown to the Iron Man. Cora swam the 500 Free, then in the 200 Free Relay and was immediately back in the water for the 100 Back. Cora showed how much grit and pure toughness she had by swimming 3 events back to back and giving each one of them 100%. That is effort above and beyond.

In the 100 Breast, Isabelle Deverick came out fast to take 2nd place while Sophomore Reagan Reed and Freshman Ellisyn Gillum swam PR’s. At this point, the short roster and this being a Girls only meet was taking it toll. The girls have been racing all their other events with little rest but they still pulled themselves together and battled through to great performances.

The final event fell the team veterans. Sydney Gercak, Mikaylah Alexander, and Morgan Pierson are two seniors and a junior that are experienced athletes and can muster up that one last fight for the 400 Free Relay to end the meet. But due to the depleted roster, the team had to rely on some untested talent from the freshman class to fill the open slot. Jill Ramsey took that #2 position and keep the team in the race. The team was spent but still managed to fight to a commanding 2nd place in the relay.

The entire girl’s team was spectacular in the season opener. Especially, when you consider that the entire roster was down to just 10. The Freshman in their first high school competition rose to the challenge. The experienced swimmers remembered their training and fought through adversity. The team as a whole ate the pain and fatigue and competed as champions are expected to compete.