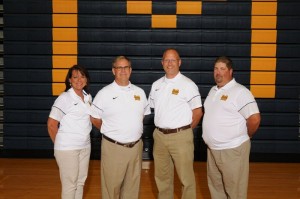 Mike was an Indiana wrestling state champion in 1976, member of the 1976 Indiana State runner-up wrestling team and the 1977 State Champion team.  Mike wrestled at Indiana University where he was a letter winner.   Mike was the Charles Maas District III award winner in 2011. He was the winner of the Tom Cameron award presented by the Indiana High School Wrestling Coaches Association in 2012.  He was also a Mooresville High School Hall of Fame inductee in 2012.  Mike served on the IHSAA Sportsmanship Committee in 2014 and the Participation Committee in 2015.  Mike was 2015 IIAAA District IV Athletic Director of the Year.  Mike served as President of the IIAAA 2014-15.  Mike recently was named the National Interscholastic Athletic Administrators Association Bruce Whitehead Distinguished Service Award winner.  Mike is one of ten Athletic Director’s in the country to receive this award.

Fred has been the Head Athletic Trainer at Mooresville Consolidated School Corporation since 1994. Other than being the Head Athletic Trainer he is Assistant Athletic Director, teaches 1 Med Terms and 2 PT classes, He also does all the grounds keeping on the athletic fields. Fred is a 1993 graduate of Indiana State University. His career began at Kendrick Hospital as a Research Assistant/Athletic Trainer. He has also worked for St. Vincent’s Hospital, the 1996 Olympics, World Basketball Championships, World Police and Fire Games and many more events across Indiana and the US.  He has been married to his wonderful wife and mother Angel for 23 years. They have three terrific children Alyson 21(senior ISU), Alex 18(Freshman at Ball State), and Abby 13(8th grade). Hobbies are golf, watching the Colts and mowing grass.

Matthew Bosworth has been employed at Mooresville High School for the past 20 years as a Social Studies teacher. Matthew graduated from Connecticut College in 1993 with a Degree in International Relations.  He received his teaching certification from the University of Indianapolis in 1998 and his Masters in Education from Indiana Wesleyan University in 2005. In addition to his classroom responsibilities, Matthew has served as an Assistant Athletic Director for the past eight years.  His coaching experience includes 10 years as an assistant football coach and 2 years as the Girls JV basketball coach.  He and his wife, Jennifer, have three children – Jack (17), Avery (15), and Natalie (10).